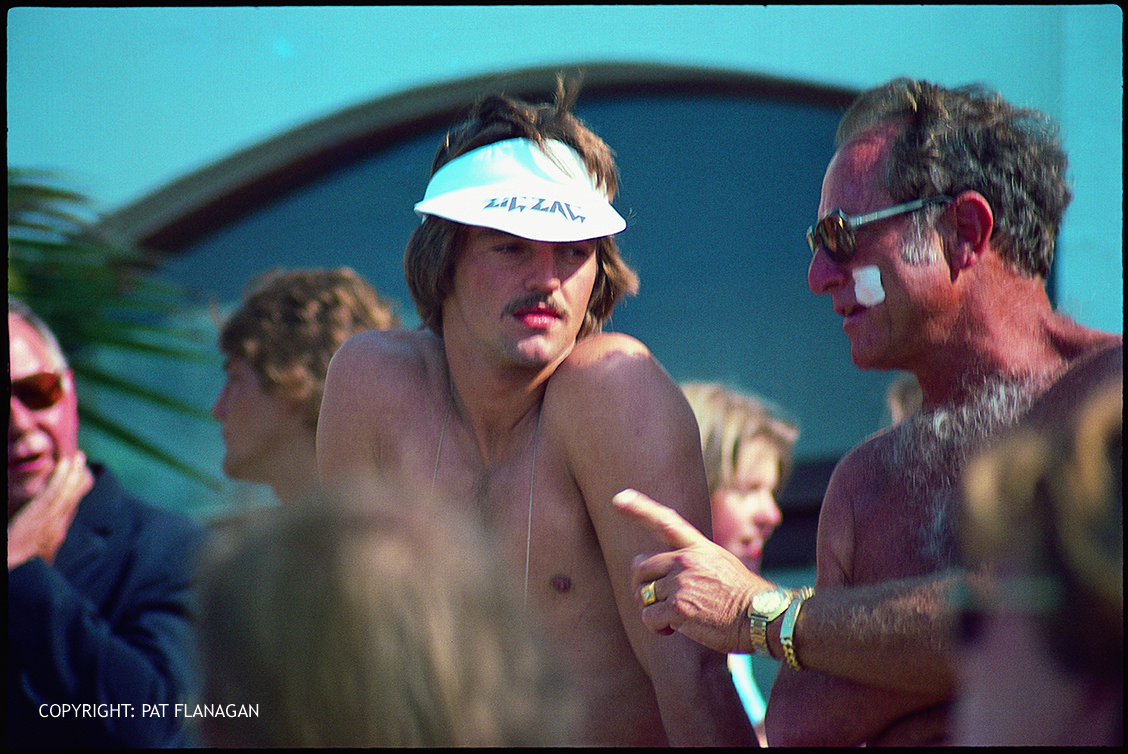 Paul Naude and Ernie Tomson talking shop at an event at the Cabanas in Umhlanga in the late seventies.

Much is said about South African surfing history. But any conversation that did not include the name Tomson or Naude would be incomplete. Long before the world tour started, both Ernie Tomson and Paul Naude where putting down tracks from which surfing would eventually grow to become the global entity that it now is.

Besides being father of Shaun, 78 ISP World Champion and Paul, Ernie nurtured a group of surfers loosely called ‘The Bay Surf Club’, instilling in them a sense of commitment, loyalty, competitiveness and sus that turned a bunch of boys with talent into world beaters. He put his eye over just about any kid with some talent around at that time, often passing a word of encouragement or some well grounded criticism. You might hear stories, word for word, to this day about the private words that he spoke to many. Guys like Chen Sagnelli. He impacted on so many surfing careers.

Too soon gone, we wonder what further impact he would have made had he remained with us for longer. RIP Ernie Tomson.

Paul was one of those whose benefitted. Later to become a mogul in globally branded surf gear, Paul was one of the original Bay Bowl groms who went on to establish a reputation at Pipeline on the North Shore of Oahu in Hawaii, placing third in the finals of the World Cup or was it the Smirnoff back in the mid seventies.

Paul glassed surfboards at Mike Larmont’s 98 West St shop, started Zig Zag Magazine, became a gifted surf photographer, worked for Gotcha then went overseas to expand his career in the rag trade in the Southern Californian boom times, twenty five or more years ago. Mike Larmont tells of the time in the early days when he and Paul would be nackered from surfing all day but still have to catch up on production at the board factory at night. Paul might have surfed a lot in those days but his work ethic was enormous thanks in part to his cohort’s zeal and in part to the influence that people like Ernie had on him in his formative years.  It’s never changed. Mr. Energy.

Nowadays, after a time at Billabong as top man in the US, he has started Vissla, a new Californian based brand that looks like it has the man’s signature all over it. For that, its bound to be a success.

Paul has an astounding collection of surfboards that rivals the some of the best in the world.