With two weeks of almost daily session at the New Pier, the French team were well prepared for this informal South Africa Team vs French Junior under 16 squad that took place on 22 February 2015. 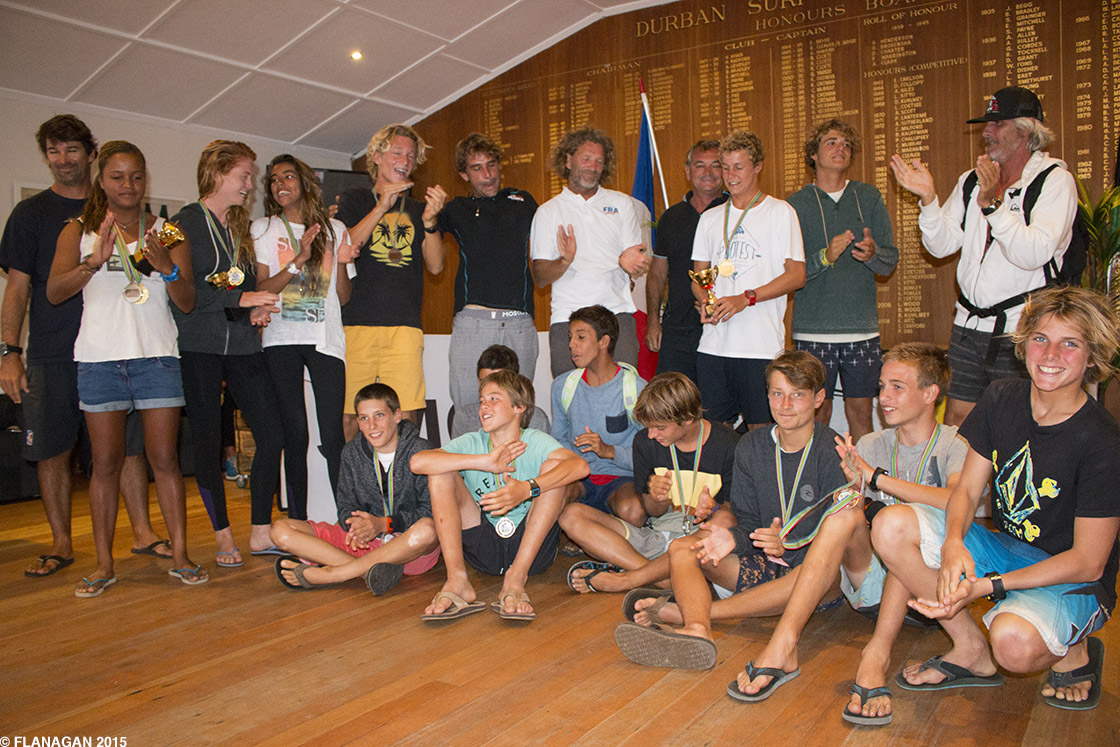 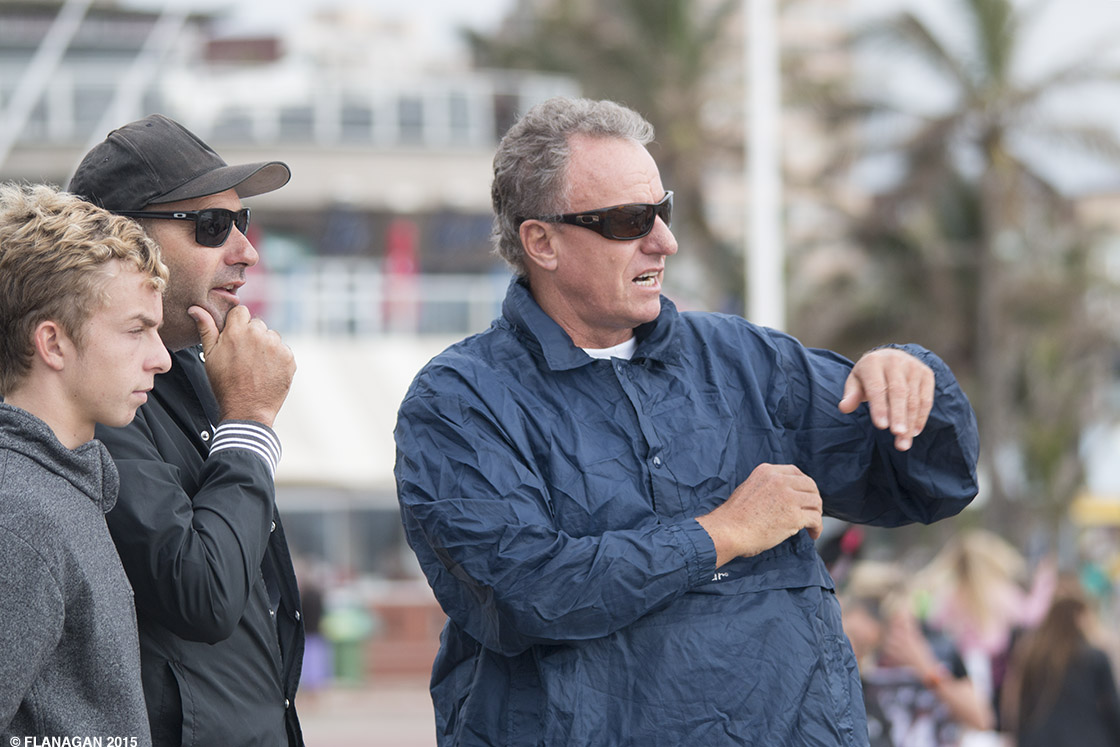 So the SA team were pretty primed on Sunday morning when the first surfers paddled out in a full but draining tide in front of the pump house at Dairy in a gutless swell and a smooth south west wind.

By mid morning the outside bank was in play and although the waves lacked a solid top to bash, the contestants were managing three turns and covering some distance. So the playing field was set for sparks to fly and they did. 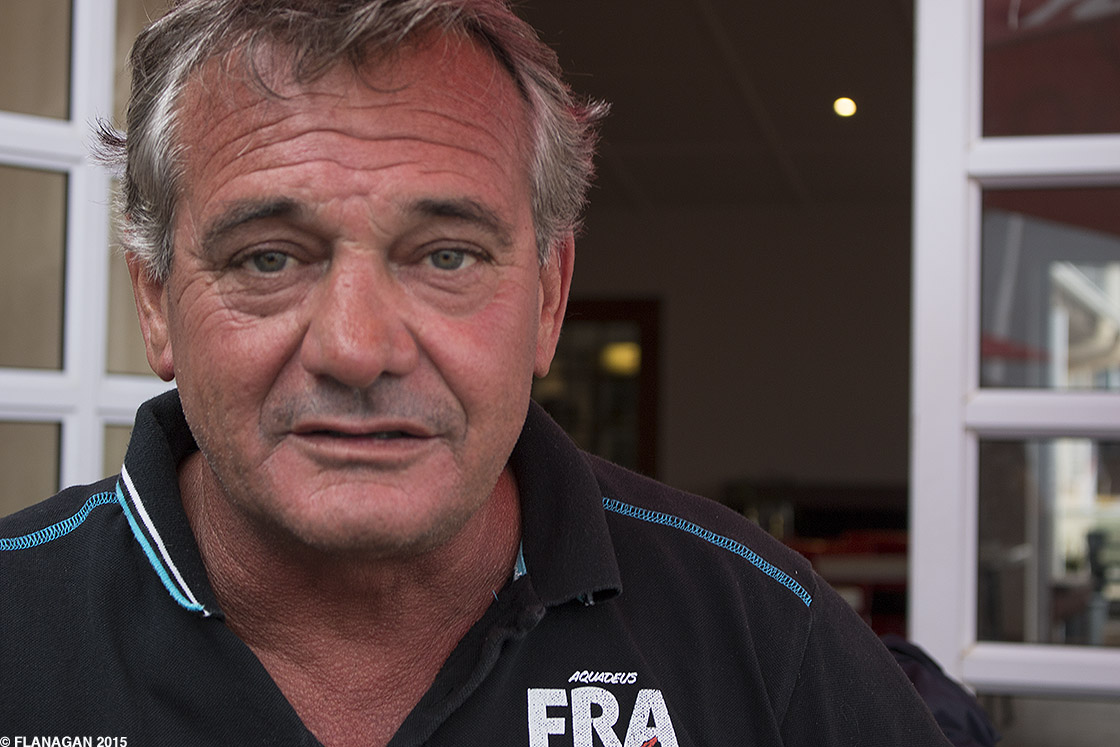 French head coach Patrick Flores from Reunion created a vision for the French team which came within a hair’s breath to being fulfilled at last year’s ISO World Junior Champs in Equador where the team just missed beating Hawaii. He is the father of WSL CT star Jeremy Flores. The French Junior have been in Durban surfing a lot at the New Pier for almost two weeks.

The French team led by verteran coach and father of CT surfer Jeremy, Patrick Flores, were on top of their game. Well prepared and super hungry they showed that attention to detail, strong mental attitudes and good physical conditioning are a vital prerequisite to showcasing the surfing talent that they undoubtedly have in abundance.

To position just where the French team are in the global ISA rankings, we need to acknowledge their second position at last years World’s held in Equador behind Hawaii, who just shaded them and ahead of Australia.

So SA were up against it – big time. Even though they gave a good account of themselves, all could see that the team is at the start of a long journey on their way towards the World event to be held in California in October later this year. Although the team lost, their performance against the might of France in this event underlined their exciting potential. 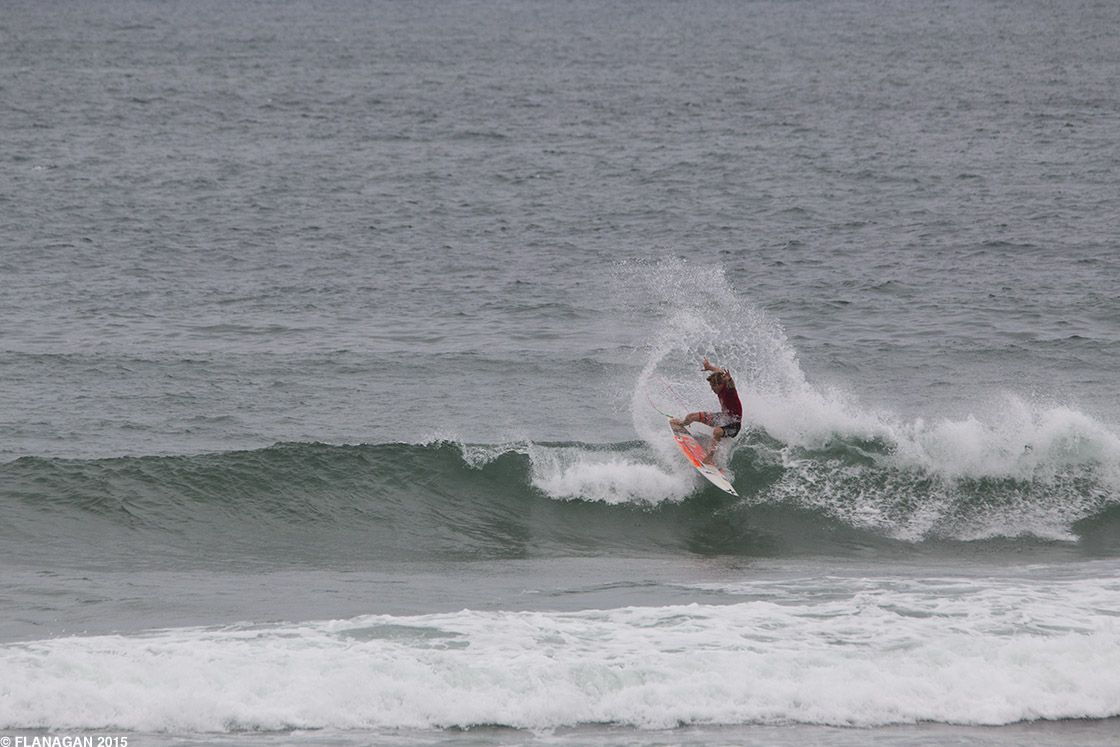 Matt McGillivray finding a lip to get his tail out. Matt was the standout SA performer of the event.

Matt McGillivrary won the Under 18 event (surfed against a mainly under 16 team from France) followed closely by team reserve Richard Kidd beating Austin Arrive and Erwam Blaine into the minor places. Matt, from Jbay took a day or so to find his rhythm in the pretty unfamiliar Durban beach breaks, but once he had, his performances just got stronger and stronger. 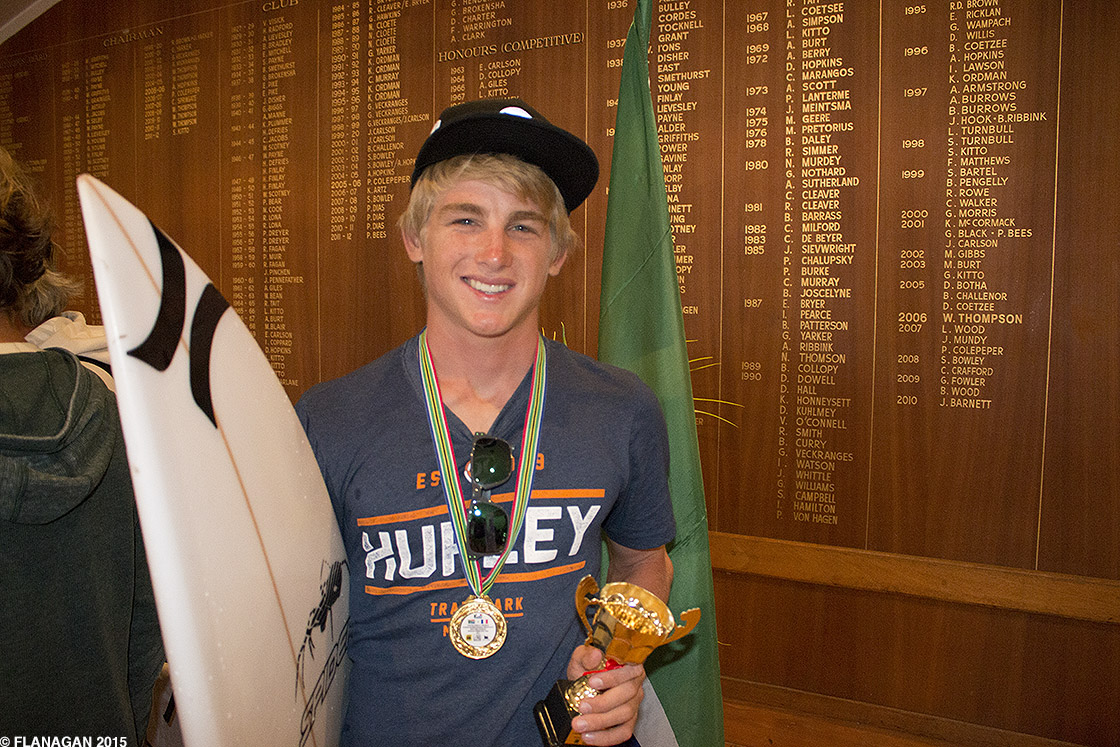 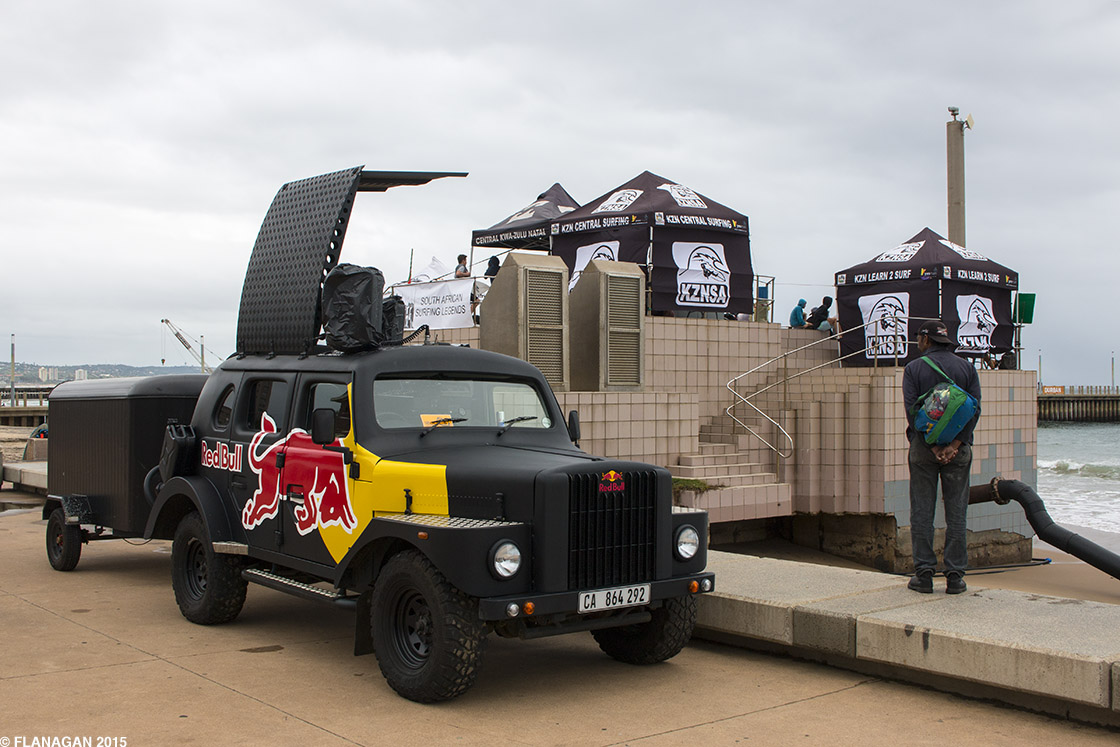 As usual Red Bull were on hand to provide the music and the PA for the event. 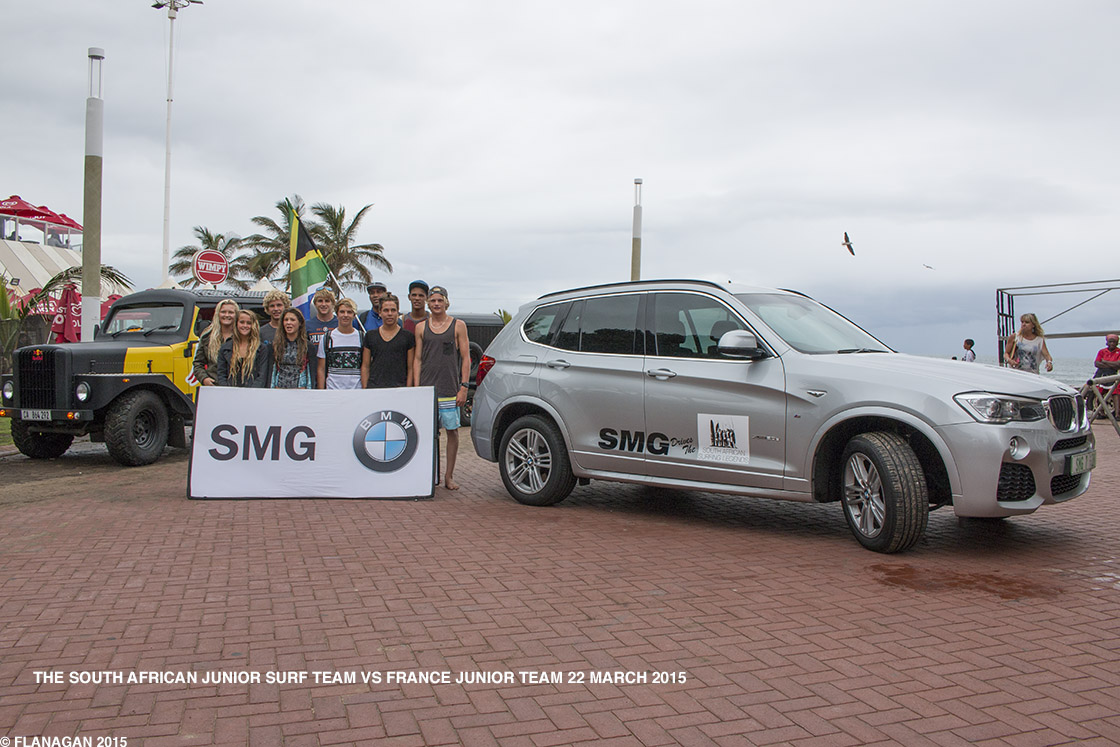 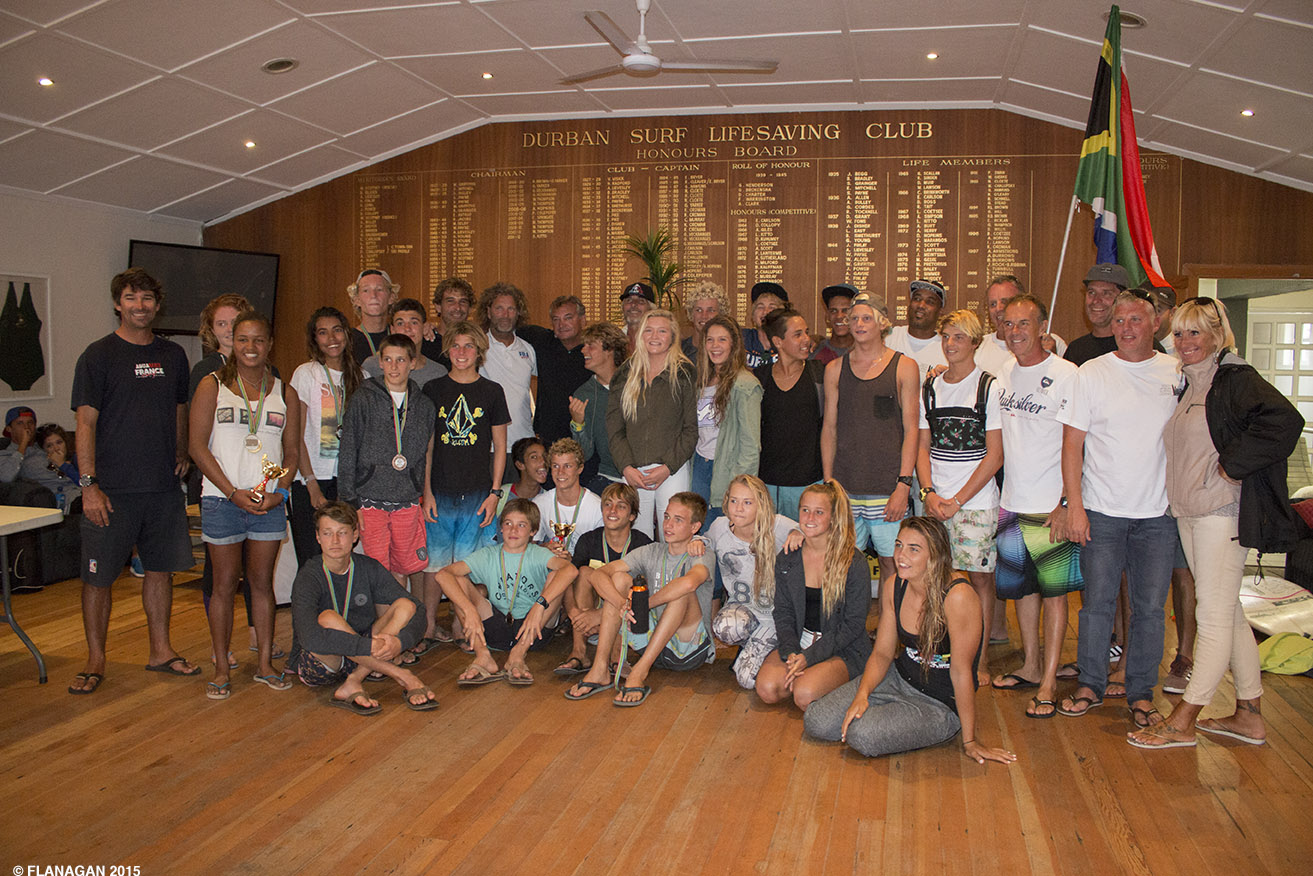 Thanks to all for a great event.

The under 16 girls was won by Juliette Brice of France and Sophie Bell made it into the finals. So did Jade Mets of KZN in the under 18 in a final that was won by Lisa Giarde whose surfing turns a lot of heads.

The all French under 16 boys final was won by Guadaloupe’s World under 16 champion Leo Paul Etienne. The Carribean surfer (maybe the first to wins ISO junior title) won going away.

SSA for their support and especially manager Isaac January.

KZN Surfing and Paul Izzard for their hosting of the event.

Jason Ribbink and Anne Wright for putting on such a well organized and exciting contest.

Redbull for providing the audio and their ongoing help with Junior surfing in SA.

SMG for the SA team’s use of a sparkling new BMW X3.

The ever present Durban Surf Lifesavers Club for facilitating the workshop and the prize giving.

Clint Grobbelaar for his informative presentation and ongoing support.

In anticipation of a tough encounter against the junior French team tomorrow (22nd February 2015) the South African’s were put through their paces by the Legends Coaching team of Bruce Jackson, Spider Murphy, Chris Knutsen and Jason Ribbink earlier today. Some assimilated heats were surfed and a number of subjects were covered in the Des Collopy Hall which Durban Surf Lifesavers Club made available to the Legends.

Renowned physiotherapist Clinton Grobbelaar was on hand to pass on his vast experience when he covered the basic mechanics of physical preparation.

Tomorrow event is going to be a cracker. 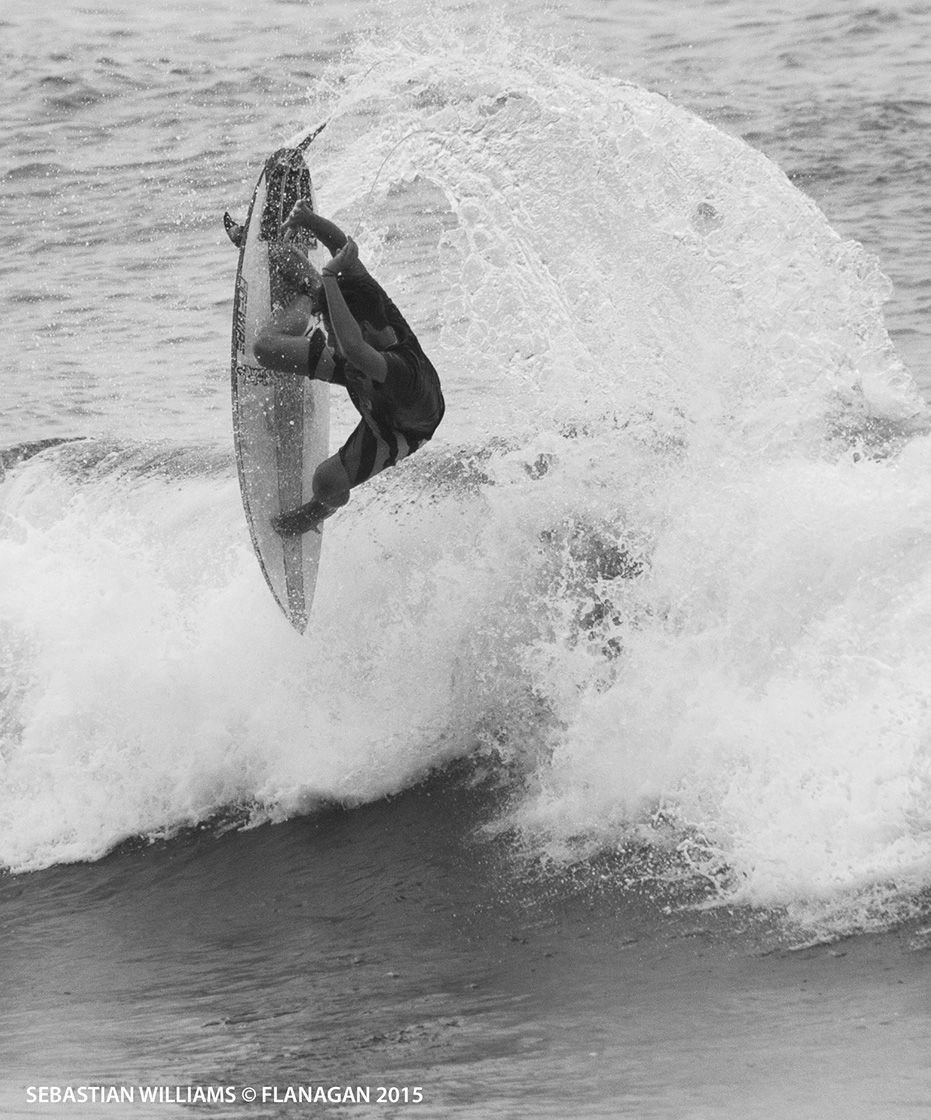 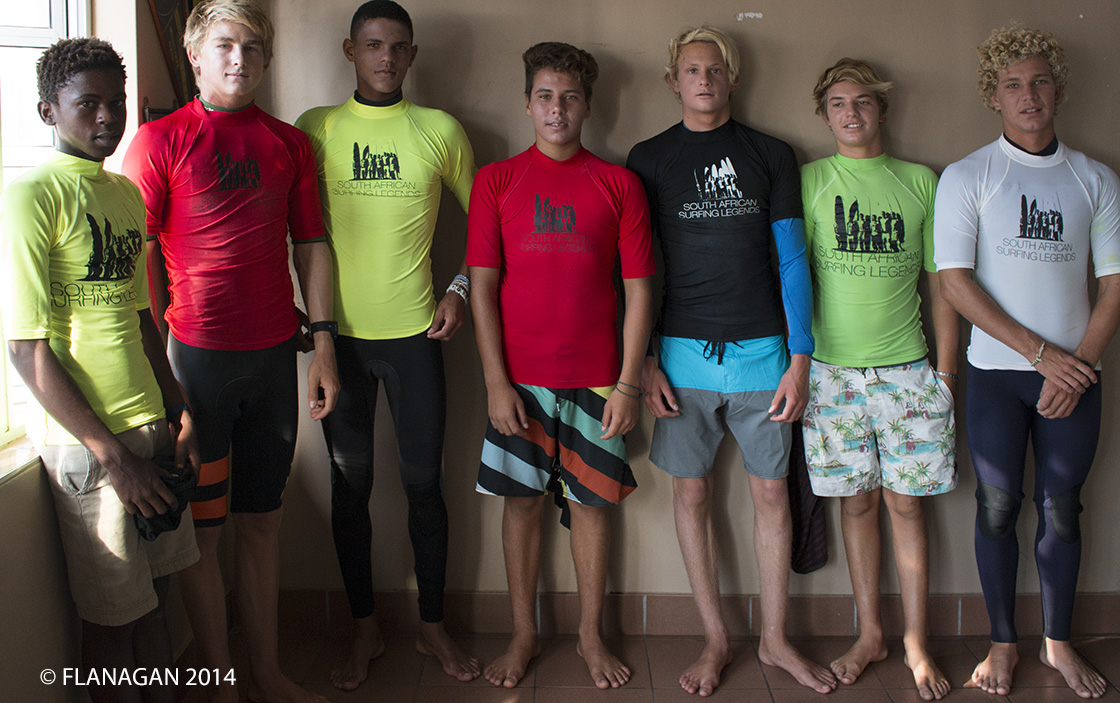 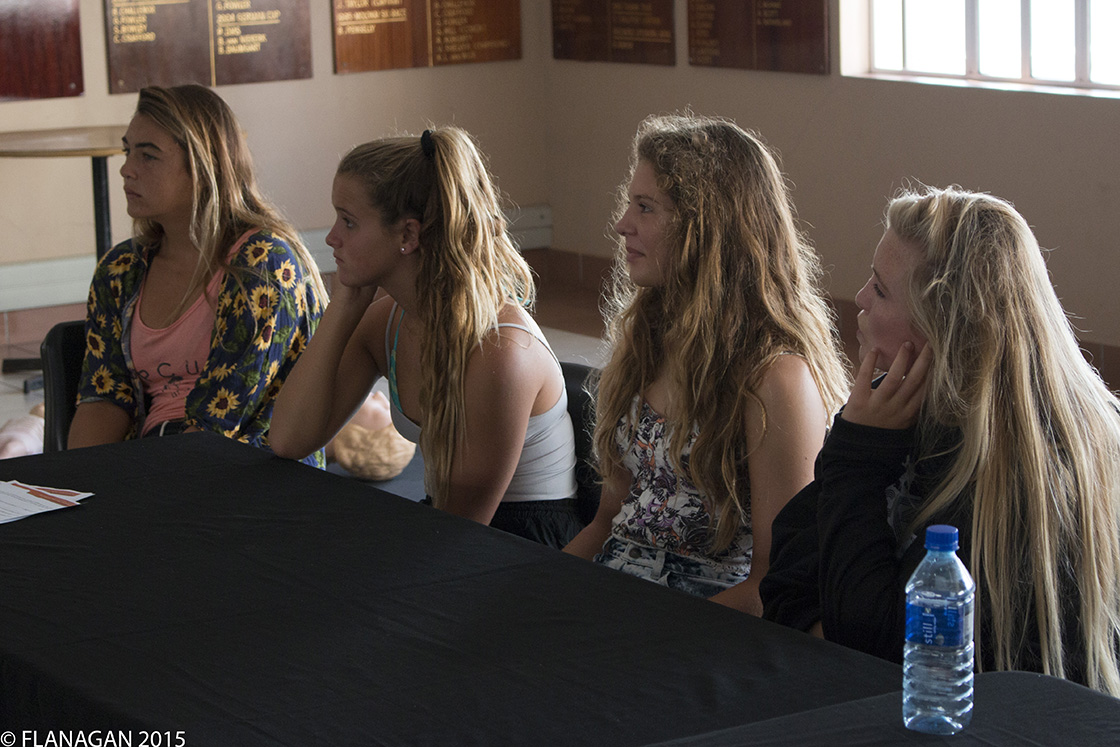 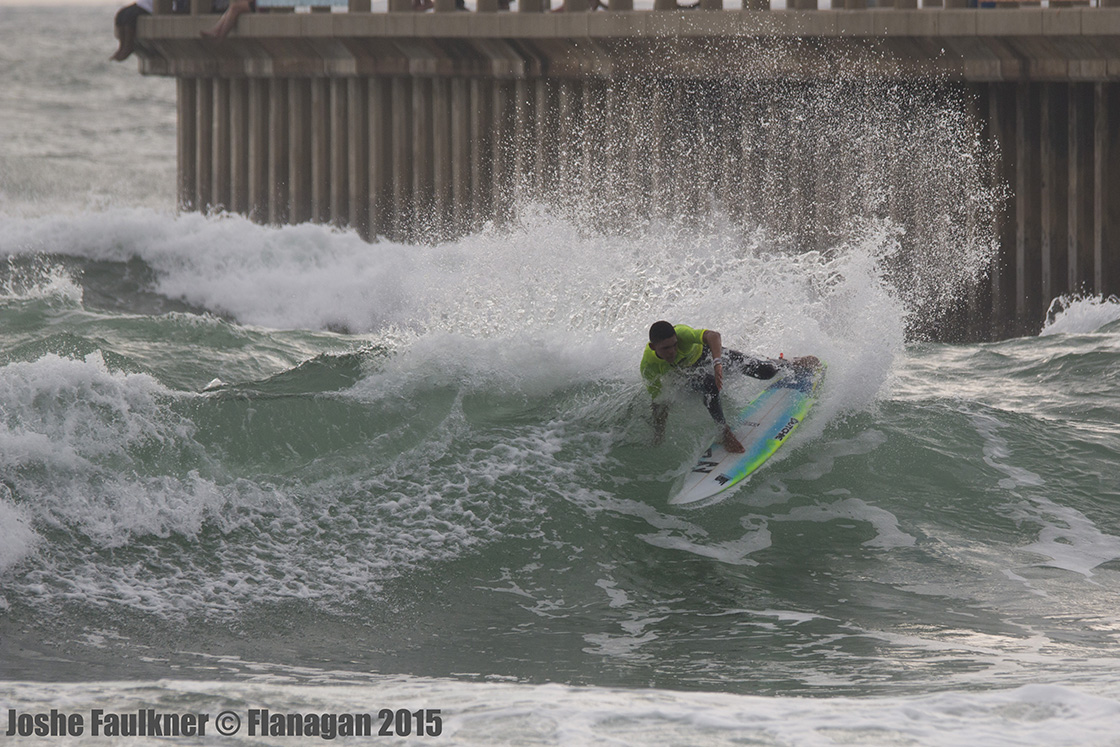 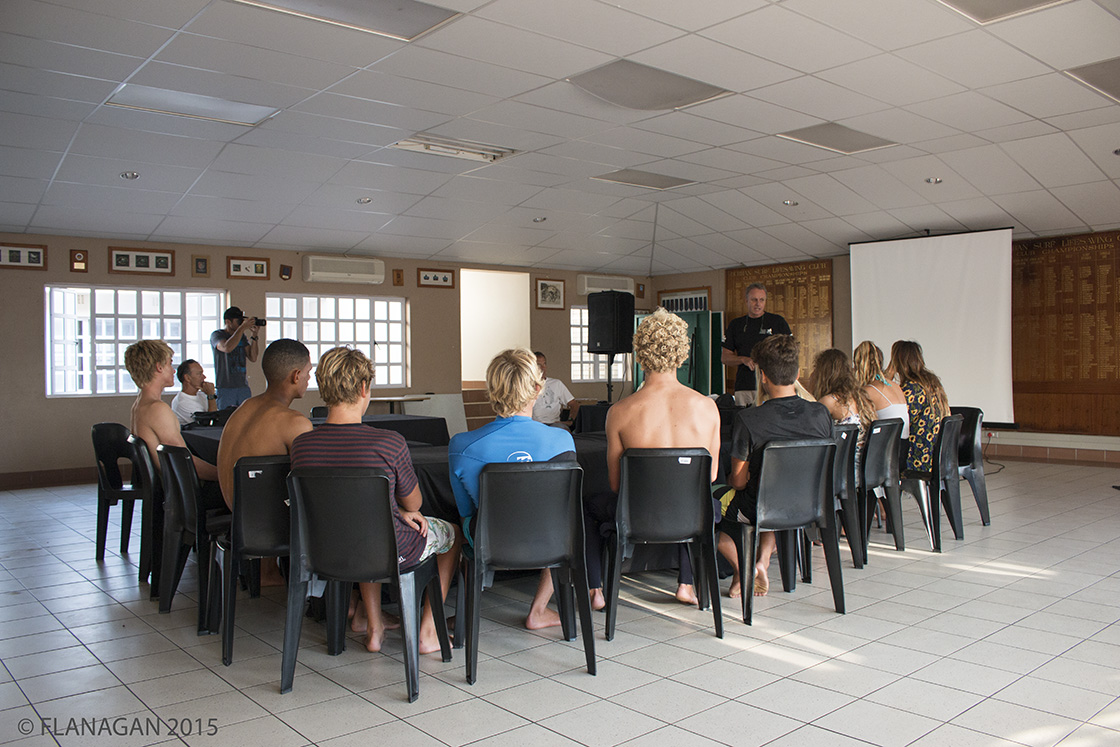 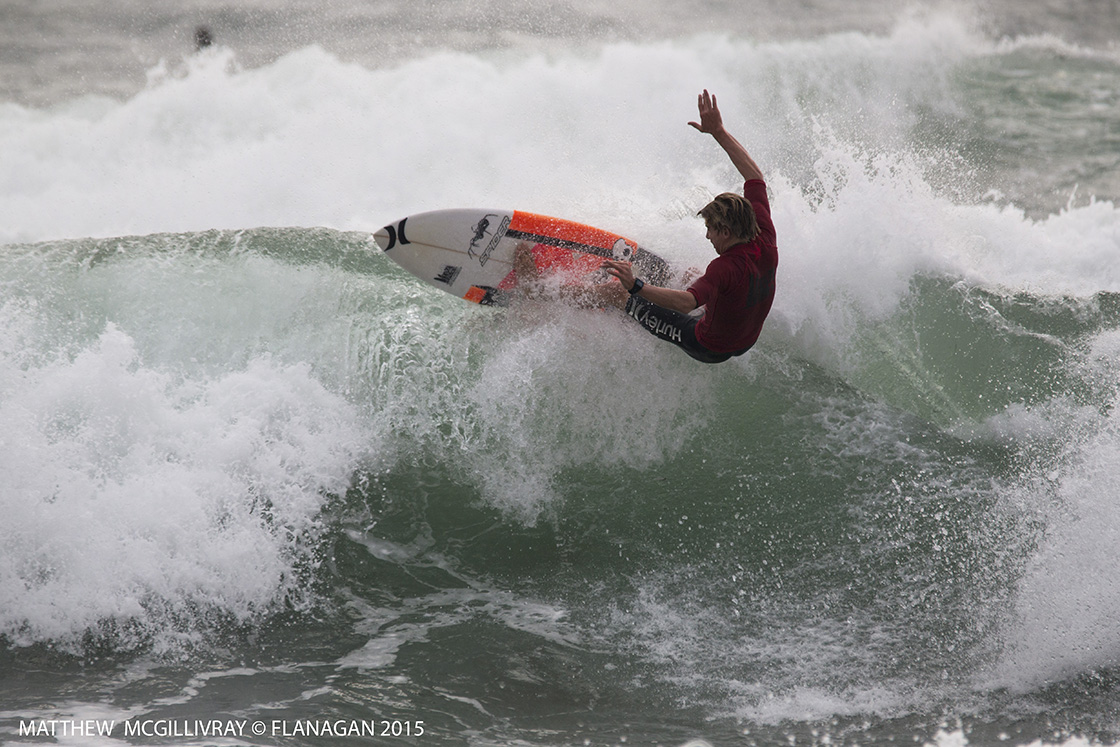