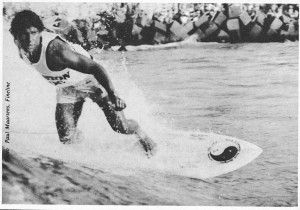 The Gunston 500 in 1979 ended a six year Shaun Tomson stranglehold that he had on South Africa’s premier surf event. Dane Kealoha deposed him. But that’s not all that Dane will remember about the South Africa of that era. The proud son of a pure blooded Hawaiian felt the full force of apartheid when as a junior he was turfed out of a Wimpy burger joint in East London for being ‘too dark’.  Not for the first time an Hawaiian had been treated with extreme disdain by the system and the people of this country. In 1970 the legendary Eddie Akau suffered similar discourtesy.

Dane might not have been shown a lot of respect out of the water in SA but when he paddled out in Durban or at JBay or anywhere for that matter, his mere presence in the line up ensured that he could take any wave he wanted. Dane Kealoha was that dominant.

He grew up in Honolulu, a part of that skateboard inspired cabal of talent that included Liddell, Bertleman and Buttons. But Dane soon developed a more aggressive hard driven style that suited his powerful compact frame. Backdoor and Pipeline were his stomping ground. Next, the IPS World Tour was an easy step up for Dane and he excelled in the era of MR, Shaun, PT, Rabbitt and an emerging Cheyne Horan, earning him a worthy runner up slot in 1980.

‘Distant’ is an apt word to describe Dane if you don’t know him well. I travelled to JBay in 81 with five touring Aussies. We stayed at Smithy’s B&B near Kitchen Window. There were a lot of rooms, some of which were occupied by the Hawaaian crew that included Dane. Noticeable at mealtimes was a distinct chasm between the two parties. The Aussies and the Hawaiians, although polite to each other did not fraternise. Full stop. Even on the beach, Dane and his crew would sit apart and would seldom engage with outsiders.

But there was another more conciliatory side to Dane. He and cohort Michael Ho, made some friends in Durban. Lista and Chen Sagnelli opened their Durban North home to them. The brother from the Bay of Plenty threw a big party in honour of his famous Gunston win in 79, complete with lei’s, that is still remembered fondly by those in attendance. For those to whom he opened up, the proud Hawaiian was a gentle, giving person with a deep spirituality. So as not to embarrass them, he never mentioned the debacle that took place in that East London Wimpy to any of his South African friends again.

Dane retired from the tour in 83 when an ill judged wrangle between event organisers and the tour administrators saw the cancellation of the IPS sanction for the three events that took place on the North Shore that year. Dane surfed all three, winning two including the Pipe Masters. Faced with the proposition of paying a $1000 fine for ignoring the ban, he retired prematurely while very much a title contender.

For nearly a decade, Dane led the pack in hollow reef wave, his incredible speed and agility a perfect match for Hawaii and it’s magical waves. A testament to Dane is the number of surfers’ sons born in the eighties and since that bear his name.

by Pat Flanagan – appeared in Zig Zag in March 2014